I want you to think about your favorite video game moments. Go ahead, I’ll wait….

I’ll wager a guess that for most of you, these moments have at least one thing common. For me and I suspect a lot of people, favorite moments typically involve some element of surprise, or you saying something like, “Wow… that was really cool.” *

Many people play video games for those moments of the unexpected, to be surprised, or to experience something genuinely unique. So, since I made you think of your own favorite moments, here are some of mine in no particular order (potential spoilers): 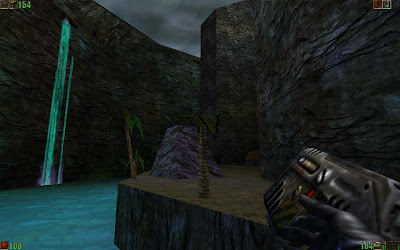 These were some pretty impressive graphics in 1998.

1) Unreal (1998): Second level, you exit your crashed ship and emerge to a lush, green planet. You are surrounded by mountains and what appears to be the first truly stunning waterfall in a video game. The music is slow and wondrous. You walk to the edge of the cliff to check out the waterfall, notice the shimmering water below and the slithering creatures beneath the surface. All too quickly, a lumbering beast emerges from a nearby tunnel, the music changes to a more tense pace and you start shooting. The environment and gameplay are enough to tell you that while this planet is beautiful, it’s also dangerous.

The starting rooftop in the Duke Nukem 3D campaign

2) Duke Nukem 3D (1996): Not exactly a gameplay moment, but a good friend and I shared a few fantastic evenings on the rooftops in Duke Nukem multiplayer. The multiplayer maps in this game were fantastic, including tall buildings you could enter, which themselves felt detailed with offices, vents, bathrooms, etc. These buildings had stairwells, they had rooftops, and the streets surrounding them were lined with trash cans, boxes and debris. These places felt lived in, they felt pretty real even if the graphics didn’t look great. It was a great place to just stand on a rooftop and have a chat.

One of the many terminals in Marathon that read more like a sci-fi novel than something you'd expect to read in a video game at the time.

3) Marathon (1994): The game that really started it all for me. I’ll keep this one brief since probably not a lot of people are familiar with it. Marathon had a detailed story that was revealed through in-game terminals which you read like a novel. The backstory is as good as many of the great science fiction novels and it gave those sprite-based aliens a surprising level of background as well as revealed their ever-changing political, technological and societal issues. The music in Marathon also helped to set the mood. ** 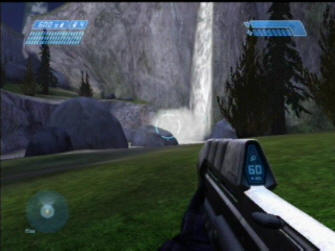 4) Halo (2001): Again, like in Unreal, it was the second level. Your ship crash lands on Halo. This was the second time I was amazed by environment graphics, and coincidentally, there was an amazing waterfall. Not only were the environments on Halo beautiful, the gameplay and physics were so fluid that it invited you to test it. Piling up grenades under cars to see just how far they would fly was a favorite past-time. As was mastering the art of timing jumps just right so that a glancing explosion would catapult you to areas of the map it did not seem the designers intended you to go. The lore and backstory of Halo was also revealed through the cut scenes, which gave the environments some real depth in terms of their history and purpose.

5) Read Dead Redemption (2010):
-Crossing the border from the US to Mexico and hearing the music start to play (“Far Away” by Jose Gonzalez).
-Watching the stars and riding through the desert on your horse.

6) Portal 1 (2007) and Portal 2 (2011):
-Solving particularly challenging (for me) puzzles that required an understanding of the in-game physics.
-Putting a portal on the moon.

7) Grand Theft Auto III-IV (2001-2008): This may be a little unconventional for a GTA game, but my favorite moments have always been listening to the radio while watching the sunset. Would it make it better if I said I also had a hooker in the car with me?? Anyway, particularly nice spots have been on the Algonquin bridge in Liberty City, Washington beach in Vice City, and on top of Mount Chiliad in San Andreas.

So if I were to boil all of those moments down and try to come up with some sort of video game soup of my favorite bits, what would I call it? I’d call it “Environment Exploration Soup”. The best parts of games, for me, are the environments and exploring everything they have to offer. I want to feel like I’m really there, I want to understand them, I want to experience the world that the game designers have created. And make no mistake, I don’t care if this world is “realistic” or not, I just want it to be interesting and evoke some kind of emotional, philosophical or intellectual response. There are plenty of moments that exhibit emotion like this available in the real world, for example, if you visit the Grand Canyon, check out geysers and hot springs at Yellowstone National Park, take a look at El Capitan in Yosemite National Park, or pictures of the Earth taken by astronauts walking on the Moon, a picture of sunset taken by a rover on Mars, or real images taken from the surface of one of Saturn’s moons… put these moments to a soundtrack, put them in the context of a game world and give them a story, and what you have is a platform more powerful than any big budget movie can provide. Why? Because the player is in control, the player moves the story along at his/her pace, the player owns the environment and the story in a video game. And what makes a video game even better are those latter examples… right now people can’t go to the Moon, Mars, or a moon of Saturn, but you can in a video game. Just like Star Trek presented audiences with compelling moral and ethical issues that are rooted in science fiction environments or cultures, video games can utilize these environments to do the same… and I think they can do it better.

Video games are fundamentally just another medium, like books and movies, for telling stories… which, by the way, is one of human kind’s oldest traditions. Sure, games can do other things, but just like all the great books and movies that people talk about and remember… and I mean the really great works… they all have something to say. When you sit down to be entertained by a book or movie, whether or not it is fiction or non-fiction, the writer sets the stage, they set the rules, they present to you a variety of scenes and images, and if they’ve done their job well, they will have presented a compelling story that either convinces you of something, demonstrates a world view, demonstrates a vision, or shows you a new way of looking at something. Games can do this too, and many of the same variables are at play. Game designers set the stage for their story, they set the rules as well, however, the order in which scenes and images present themselves are sometimes up to the player. The way in which the environment is experienced may also be different from player to player. So game designers have an even more difficult job of making sure everything in their world is part of their vision and tells the story they want to tell.

Video games offer us an exciting new medium by which we can be entertained and enlightened. It’s sad that some people only view them as children’s toys. They have so much to offer and the industry is really only in its infancy. Throughout this blog, we will explore these kinds of ideas. Drawing on our personal experiences as members of the scientific community, we will also explore how scientific discovery and scientific data can be used to create even more compelling game environments and stories.

*In video games, favorite moments can be almost anything, and at its most fundamental your favorite moment could be something as simple as defeating the final boss. These types of favorite moments involve overcoming the game’s difficulty, or the satisfaction of winning a challenge. I’m not going to be talking about those types of moments. You should read this article, by Pride St. Clair over at PikiGeek for an interesting discussion on game difficulty http://geek.pikimal.com/2012/02/01/getting-hard-difficulty-as-narrative-tension/.